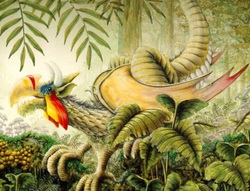 Lesson notes from YTA Founder:  I have often thought of writing and giving a lesson on "Cells" prior to the Different Brains lesson and prior to the DNA-RNA-Protein lesson.  I imagine taking cells from the the instructor's or student's cheek, or from the blood coming out of a pin prick of the instructor's finger.  I could then put the cells on glass slides and stain them with a dye that made it easy to see the cells under a microscope.  In the end I did not put this lesson in the 10 lesson YTA program because a microscope is on the expensive side and I have tried to keep the supply costs for lessons down.  In addition, some classrooms have a microscope, but others may not, and I have attempted to maintain the ability of an instructor to provide the program to groups of students in any setting with a table and chairs, and a white board or other display surface to write on.

In the DNA-RNA-Protein lesson the students are first introduced to the importance of proteins as the work-horse of cells, through the discussion of one protein, hemoglobin.  I first have the students imagine that I took blood from my finger and then I show them a picture of the cells that would be seen under a microscope after staining, utilizing a handout (see handout file below).  I focus on the red blood cells and their function, and we come to the conclusion that these cells perform the important function of carrying oxygen around the body for energy.  As a review, I refer to the Neutelpro and Peewee trading cards and have the students describe an oxygen atom and the bond (sharing electrons) between two oxygen atoms in an O2 molecule that is commonly found in the blood.  Through instruction and discussion we arrive at the importance of a protein expressed in red blood cells called hemoglobin.  I show them a molecular/ribbon diagram of hemoglobin with the 4 globin domains and the heme group that actually binds to oxygen.

At this point I ask, "what is a protein like hemoglobin made of?"  The students are guided to conclude that it is made up of atoms; atoms forming bonds to make molecules called amino acids.  Next I show them models of two amino acids (glycine and glutamate) built with a molecular modeling kit.  (See a glutamate model below). 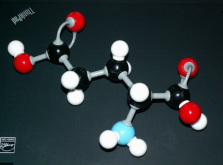 As a further review of past concepts I ask some students to describe the components of one of the amino acid models (protons, electrons, neutrons, bonds, and perhaps other componenets).  And then I inform the students that there are 20 different amino acids.  Each amino acid has a central carbon that is bonded to four things: (1) a nitrogen, (2) a carbon that is bonded to two oxygen atoms, (3) a hydrogen, and importantly (4) a group of atoms that is different in each amino acid.  A protein like hemoglobin is made by making a chain of these amino acids by forming bonds between them.  An additional handout shows the chain of amino acids for making one of the four proteins (globin) that form hemoglobin.  Each amino acid is a single letter, and below the string of letters is the code for the amino acid associated with each letter.  To be certain the students are comprehending up to this point of the lesson, I ask them to show me glycine or glutamate in the globin sequence utilizing the handout.

Discussion next centers around the importance of making proteins with the correct sequence, with no mistakes in the amino acid order, to avoid proteins that do not function.  In particular the students are guided to discuss the repurcussions of making a hemoglobin protein that does not bind oxygen because the amino acid order in the protein made was not as shown in the handout; hemoglobin might not bind oxygen and the organism would die due to lack of energy.  Once it is agreed that the cell must be accurate in making the approximately 20,000 proteins in a cell, I ask, "where are the instructions for putting the amino acids in the correct order for each protein?"

It is at this point that we first mention DNA, and I show the students a model of double stranded DNA helix. There are many models that will work, but it is key for this lesson that the different DNA and RNA bases be represented, and that the double helix can be unwound and seperated into single strands.  Referring to the white blood cell in the handouts with the stained nucleus, I tell the students that DNA is located in the nucleus of cells.  I walk the double helix DNA model around the class and allow the students to look at it.  I ask the students to suggest ways that this double helix might be used as instructions for linking amino acids together to make proteins.

In the next portion of the lesson we put it all together.  I give a demonstration of the flow from DNA to RNA to protein, and then guide a number of students to give the same demonstration (see picture below). 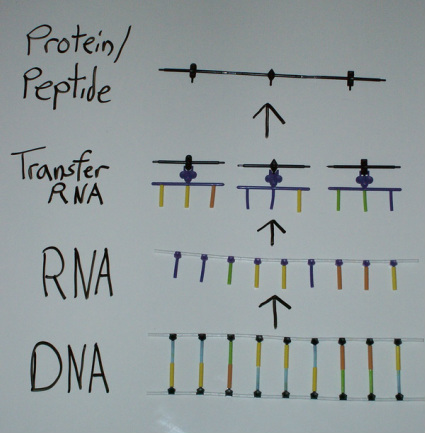 The final handout gives the translation from DNA to RNA to amino acid for 7 amino acids.  I write DNA sequences on the board and ask the students to tell me the amino acid sequence of the protein that will be made.

As a final thinking excercise I have the students note in the cell handout that the red blood cells have no nucleus, and therefore no DNA.  So how is protein hemoglobin made in red blood cells?  After some hypotheses discussion I tell them that a small part of the cells that turn into red blood cells pinches off with the nucleus in it, after the DNA instructions for making hemoglobin have been utilized.