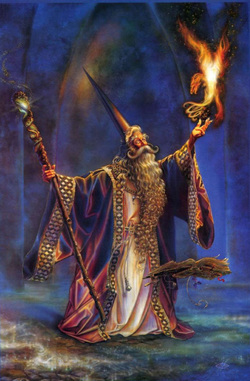 Lesson notes from YTA Founder:  If the total energy in the universe was not conserved (constant), and could be created out of nowhere or disappear into nowhere...what a science fiction book it would make!  But alas it appears otherwise, or at least it greatly aids scientific advancement to accept that it is so.  In this lesson I involve the children in a discussion of the basic concept of Conservation of Energy.

I start the lesson with a review, referring to some of the YTA trading cards the students have already earned.  We review energy of movement, or kinetic energy, demonstrated by a rolling tennis ball (Pegaspeed).  Then we review the conversion of movement energy into heat energy (Heanug).  I have a number of select students demonstrate the transfer of energy between forms utilizing the sandpaper demonstration and the rolling tennis ball demonstration of prior lectures.  The only new concept I introduce during these demonstrations is that the energy of the arm derives from food energy.  So we have the chemical energy of food being converted to the kinetic energy of the arm, which is converted into the kinetic energy of the tennis ball, and finally into heat energy in the floor and now resting ball.  Whew!  That is a mouthfull.  But through these demonstrations children not only review earlier concepts and practice logical thought and discussion, they also understand that energy in our world is frequently being converted from one form to another.  Energy transfer is all around us.

I love bringing out the hot wheels tracks next (see the picture below). The kids love to see this and enthusiastically raise their hands to be part of the demonstrations.  I first keep the tracks flat and have a student give a demonstration similar to that of the rolling ball, discussing the conversion of energy between different types. 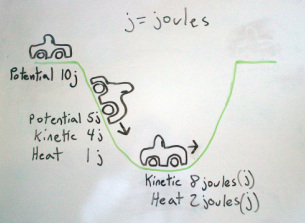 Next I form the tracks into a U-shape, with a landing on each end, all held in place with the help of students.  I place a car on one of the landings and have a student give the car a very slight push so that the car just makes it off the landing and shoots down the track.  I exclaim, "Wow, look at all that kinetic energy!  Where did that come from?!".

After listenting to the hypotheses, I tell the children that when gravity exists an object can have what is called potential energy.  I sit the car on the landing and note that gravity would really like to accelerate the car down the track but the net force is zero because of the landing (refer to the Forcen trading card).  But once the car gets past the landing gravity can accelerate the car.  So scientists say that even though the car on the landing does not appear to have energy, it has potential energy because of gravity, that can be converted into kinetic energy.

I next illustrate the U-shaped track on the board (see picture).  I draw the car at 3 positions (on the landing, half way down, and at the bottom).  First I work with the children to identify the types of energy present at each position.  During the discussion, we discuss the Heanug trading card to bring up the idea that increased heat energy is probably generated along the way.  I give a number of the students a chance to describe the transfer of energy as the car moves along the track.

One of the interesting discussions that I have encouraged after asking whether energy can come out of nowhere, is one related to general relativity.  I note to the students that energy really does seem to come out of nowhere when the car falls down the track.  The students may note that the energy did not come out of nowhere, it came from gravity, which is real.  But I ask them if gravity has atoms?  Does gravity touch the car when it is applying a force to accelerate the car?  Where is gravity?  How does it exist?  This is a perplexing series of questions for anyone to answer but I encourage the children to think about it and to suggest hypotheses.  I eventually tell them that many people have thought about these questions and few have answers that are proven correct by experiments.  Einstein currently has the best one, but there is still a need for scientists to increase our understanding further.

As a final thinking exercise in this lesson I have select students explain the transfer of energy when the car continues past the bottom of the U-shaped track and travels up the other end.  I allow the class a good amount of time to try to figure out the fact that kinetic energy will be transferred back to potential energy (and some more heat) when the car moves up the other end of the track.   When students seem stuck, I point to the illustration already drawn on the board above, and telll them there are some great clues in the figure.