Lesson notes from YTA Founder:  One of the best parts of the States of Matter lesson is giving out the Solidun trading card...Right from the first time I show the students all the YTA Trading Cards to get them excited about the program, they notice and point out Solidun.

But on the science side, this lesson solidifies the concept that atoms, which we can only model and imagine, come together to form something we can often sense, matter.  But these atoms come together in our universe in different ways; forming gases, liquids, or solids, often depending on the temperature.

Much of the lesson focuses on water since it is so easy to work with and readily available.  I begin by having the students describe a carbon atom and then a water molecule (see lesson supplies in picture below), referring to the Neutelpro and Peewee trading cards during the discussion.  Through further discussion we conclude that putting a trillion trillion molecules or atoms together would result in "matter" like we see all around us.

But what would this matter look like?  We explore this question with water molecules.  The speed and proximity of water molecule models is varied by the students holding the water molecules.  I encourage the students to make the slowest moving water molecules stay close to each other, barely vibrating.  When they move faster because I added heat to the matter, the molecules spread apart a little and can move around each other but generally stay together and form a puddle on a flat surface.  Finally, with some more heat added the molecules split apart and begin to fly around the room in the student's hands.  Following this demonstration, I reach a consensus with the students that their are three ways that atoms can exist in matter and I write this conclusion on the board.

Then we move away from models of water.  We observe three states of matter for water molecules, or three ways in which water molecules can show themselves in our realm; ice, water, and evaporated water or gas.  Through the interactions and demonstrations it is concluded that solids keep their shape in a container, liquids form a puddle, and gases take the shape of their container.  These conclusions are also written on the board.  After making the last conclusion we deal with the fact that we did not actually see the water molecules form a gas, even though we did see the liquid water disappear when heat was added to a water droplet on a metal rod.

So we move into proving that the atoms in the air do in fact form something real called a gas, that we cannot see.  First a baggie is used to trap gas in a way that can be sensed with touch as something we cannot compress.  In addition we push up the air in a hollow cylinder with water to affect a balloon (hopefully inflate it) on the other end of the cylinder, proving that something that we could not see was inside the cylinder before the water was introduced.  I then give the students ample opportunity to prove to their classmates that a gas called air exists, utilizing the baggie or balloon methods that I demonstrated.

Finally, I show the students examples of different states of matter and have them identify the samples as solids or liquids.  Small granular solids are particularly interesting because they seem to form puddles but the grains in fact keep their shape, defining them as as a solid.

After awarding the Solidun card to the students, since this is the 10th and last YTA lesson in the program, we move into the awards ceremony, and each child becomes an official Thinker, earning the Plato trading card (on the "more..." pull down menu in the toolbar above) 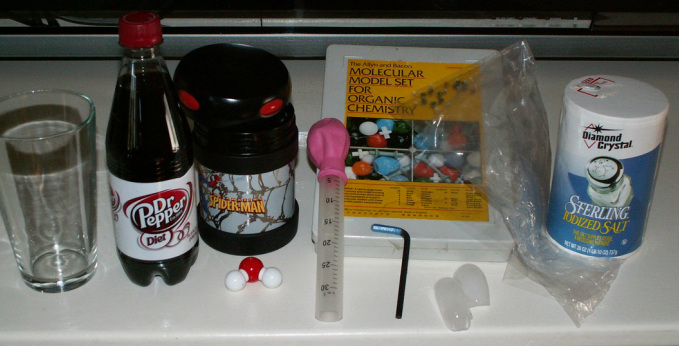