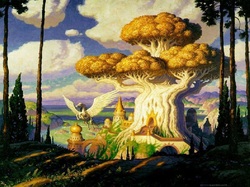 Lesson notes from YTA Founder:  Physics is a subject built on the utilization of the rates of change for numerous parameters.  If one knows the rate of change of a parameter, one can turn on the thinking machine and start predicting the future.

This lesson begins by discussing the children's ideas regarding the meaning of the word "speed".   After arriving at a consensus for the meaning of speed, students take part in measuring the distance a ball travels and the time it takes to move this distance.  Then I ask the students how we should use these numbers to calculate speed.  Should we add them, multiply them, divide them?   The speed of objects is of course calculated utilizing division.  In the case of a tennis ball rolling across the floor, we measure the speed in feet per second.  Then I have another group of students repeat the operation and discuss the methods and conclusions.

We next measure the speed of a walking student in feet/second, and we convert this measurement to the units of miles per hour.

This YTA lesson is the first of a few in which the children are asked to think about the magnitude of a VERY big number; in this case the speed of light.  The speed of light is compared to the speed of the walking person and the speed of an airplane, an object usually considered "fast".  The time necessary to reach the Sun from Earth for an airplane and light is compared by first asking the children to guess how long each would take.  After the answers are given, the magnitude of the difference is stressed.  Then we do something that the children remember for years; they race light.  Each child lines up to race light over a set distance to a wall, allowing the students to stand as close to the wall as they want.  Ready, set, go, and like a flash the light is already on the wall.  It is important to have a powerful flashlight for this, and a wall in which the light beam shows itself well.

Next I really get the children thinking by showing them that moving objects can have a speed of zero....if the person measuring the speed is moving too.  Thus speed is always "relative" to the person measuring the speed.  That is, except for light, hence Special Relativity.  That is correct, these kids will learn about Special Relativity.  Well, not the mathematical space/time explanation, but the observation that caused all the commotion:  the speed of light is constant no matter how fast the person measuring its speed is moving next to the light beam.  Some good discussion can follow this, sometimes guided discussion but often unguided discussion about time travel and discovering life on other planets.

I finish the Speed lesson with some challenge questions to stress that speed is relative, taking the opportunity to give multiple children experience in explaining the logic behind their answers.